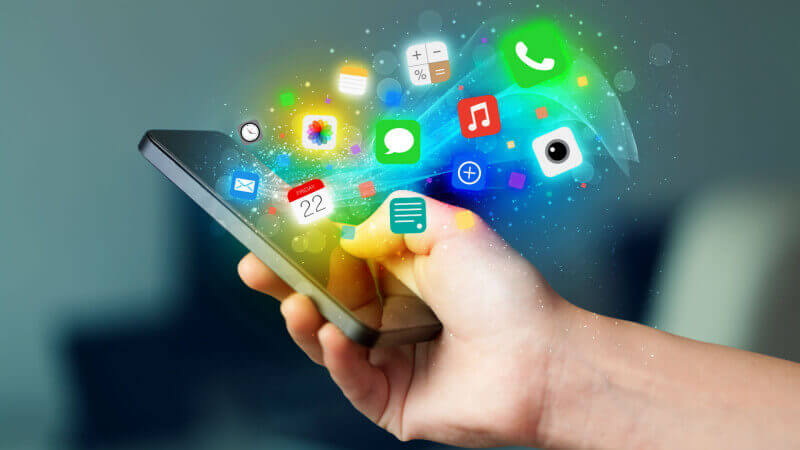 How many apps do you have on your smartphone? In the US, the average figure has been hovering around 27 for the last few years. We spend 85% of our phone-time using apps, but research suggests that we only use a handful of them regularly. Many are downloaded once and forgotten.

Steve Jobs was arguably the first person to see the true potential of mobile apps as a way to consume information. In 1983, he predicted a system of information distribution, similar to a virtual record store. 10 years later, Apple’s Newton device had its first crack at providing exactly that, but the world just wasn’t ready. It wasn’t until 2008 that Apple’s iPad would bring apps into our lives for good.

The App is Dead

After 8 years of immersion in this new digital ‘record store’, our attitude to apps has moved on. We expect app functions that match or exceed the web equivalent, and few of us have the patience to battle through copious amounts of ads.

We only retain only keep 20% of the apps we download, suggesting that our tolerance for poor experience is pretty low. Additionally, we spend 50% or more of our time in just one app.

When you factor in the huge expense of developing an app, there’s a clear disconnect between what brands expect people to do, and what they’re actually doing.

Additionally, the world around us is changing faster than the app stores. Wearable devices are driving new content consumption trends, and driving a fresh diversification in screen sizes. Fatigued office workers are being encouraged to switch off and escape from the constant bombardment of alert tones, notifications, and tasks.

Apps aren’t exciting people any more. But change is on the horizon.

Notifications are a great example of a bugbear that every smartphone user has to manage. Each app has its own way of delivering updates to a user. Some apps are less responsible with permissions than they should be. The resulting onslaught of chimes, pings, and on-screen interruption means many notifications are dismissed without being read.

Recontextualising notifications, and making them easier to consume, is one important step in modernising the mobile app. Look at Google Now; it presents updates as cards that stack up on the homepage, so the user is informed without being pestered. We’re going to see more standardisation like this.

Prediction and AI are also coming to the fore, and the mobile device is an ideal platform, whether brands choose to launch chatbots or embed AI into app functionality. For developers, Google Assistant is a critical turning point, because it allows app users to make complex requests quickly. While Amazon’s Echo is very good at switching the lights on, or playing music, Google Assistant is pushing beyond simple commands and towards conversations. Each voice command is processed relative to the ones before it.

Eventually, the app could be completely replaced by websites that actually respond to user requests. We’re on the cusp of an era where the e-commerce store isn’t just a storefront, but also providers personal shopping advice and tailored customer service. Indeed, companies like Grid allow brands to use AI to actually build the websites that their customers are using.

Smart brands already know that apps aren’t everything. For every Facebook, WhatsApp, or Pokemon Go, there are thousands of apps that aren’t getting much love at all. For brands, this all comes back to ROI and engagement, and using new technology to reinvent the experience. For users, it’s a question of usability, convenience, and privacy. The apps that can meet those demands will lead the evolution of the app